HVAC on the Move: Land, Air, Sea and Space 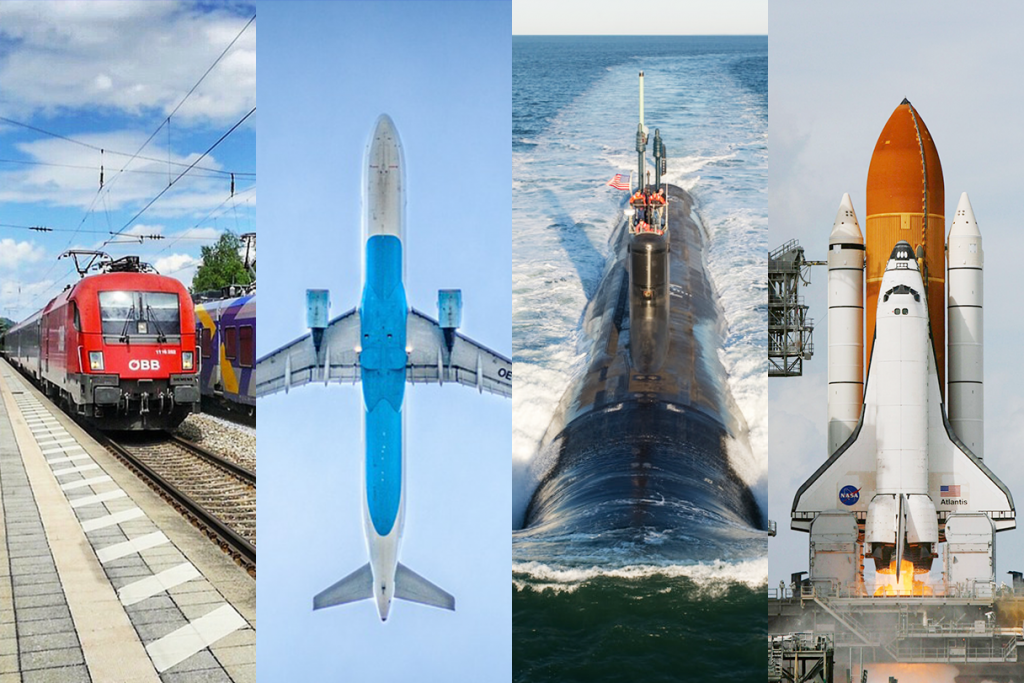 It’s a hot summer day and you head out the door and rush down the street to catch the bus. Sweating and breathing heavily, you climb aboard the bus to be greeted with cool refreshing air inside. What’s better than the cool relief provided by air conditioning in the sweltering heat? Heating and cooling in cars, planes, trains and buses make our commutes and travel much more convenient, but it’s not necessarily an easy task and each mode of transportation presents unique challenges. Heating and air conditioning in transportation does more than keeping us comfortable while getting from point A to B, it also plays an important role under the sea and in outer space as well. Let’s explore the technology that makes heating and cooling on the move possible.

HVAC on the Road Again

Driving a car in the summer without air conditioning can make for a brutal journey, so keeping comfortable and safe on the road makes all the difference. Heating is also necessary while driving in the winter. The air conditioner compressor in a car is coupled with the crankshaft of the engine to drive the compressor in place of an electric motor. Automobile heaters are essentially radiators that pass hot fluid through the tube of a heat exchanger between the fluid and cabin air. Whether on the way to work or out for an afternoon drive, we can thank these systems for keeping us happy.

While train and subway HVAC systems are less standardized, they operate under similar basic principles and surely get the job done. HVAC systems in trains are often composed of multi unit inverter condenser and evaporator sections mounted on top of the train or beneath the floor in the undercarriage, although they can also be mounted on the side of the train as well. The systems can also be split so that cooling is distributed from the ceiling within the cabin and heat is distributed from the floor. HVAC systems must be particularly efficient at ventilation on subway cars not only to provide quality air to passengers but also for safety reasons in case of a fire or other emergencies. 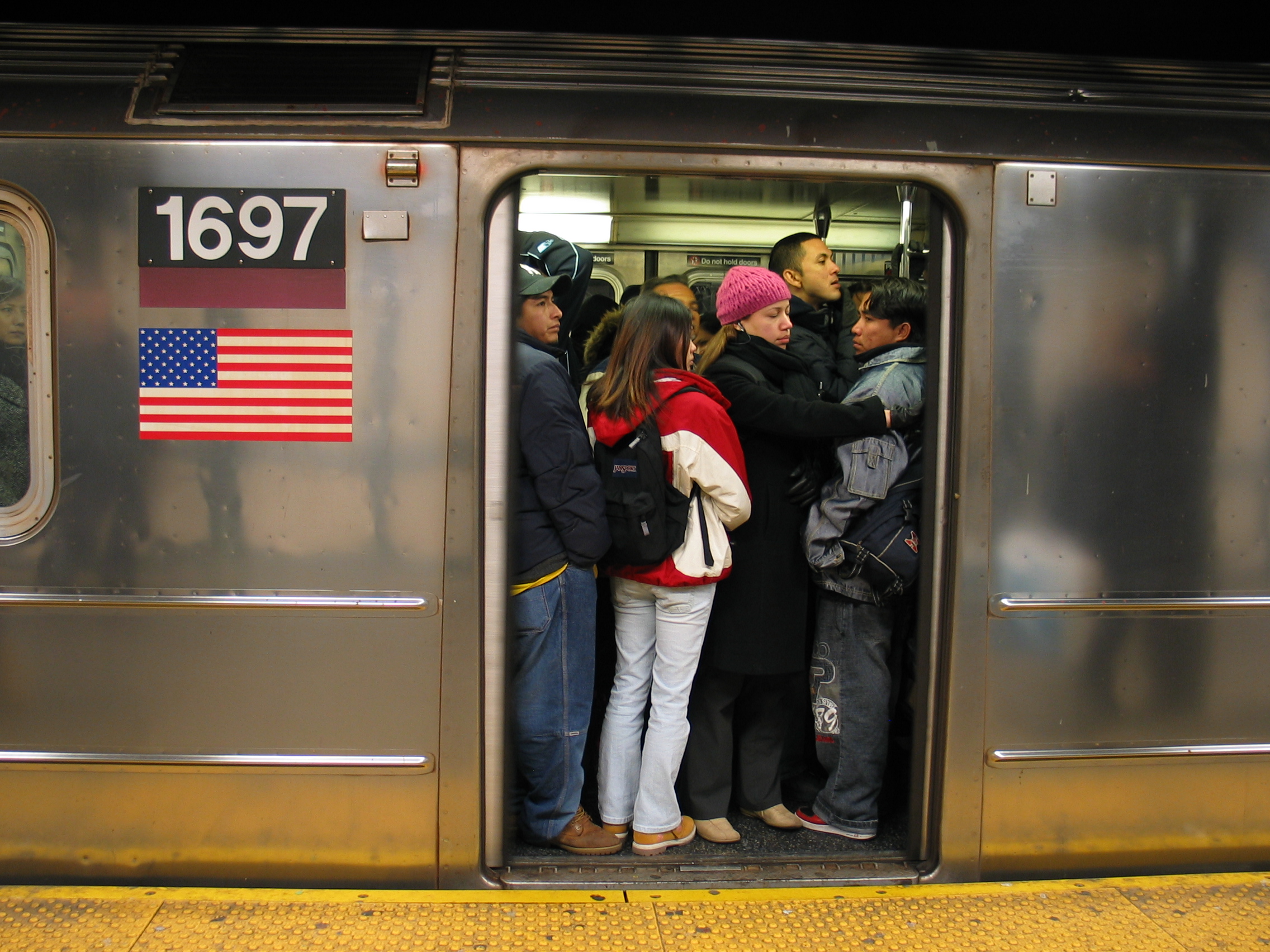 Air conditioning can make all the difference on your daily commute

The HVAC on the Bus Goes Round and Round – Buses 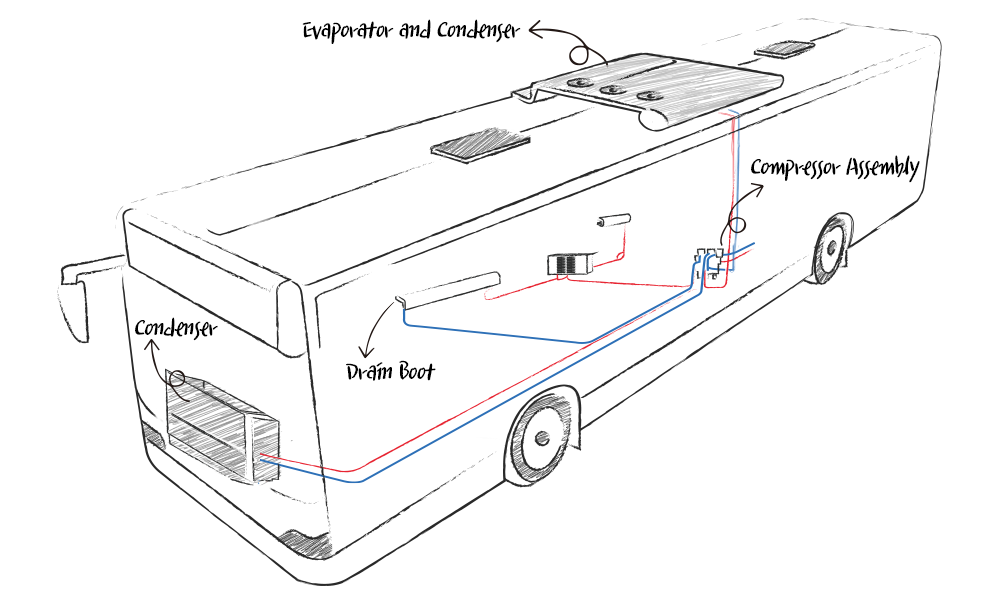 Buses are an easy and convenient way to get around whether traveling long distances or just commuting around the city. Air conditioners on buses operate similar to those on trains, but there are additional conditions. HVAC units on buses are commonly housed on the top or rear of the bus with the compressor being run by the engine as in cars. In recent years, roof mounted units have grown in popularity due to their improved energy efficiency. Constant exposure to the elements and rough road conditions can take their toll on the compressor of a bus HVAC system, so protecting the compressor is crucial to the longevity of the HVAC system. 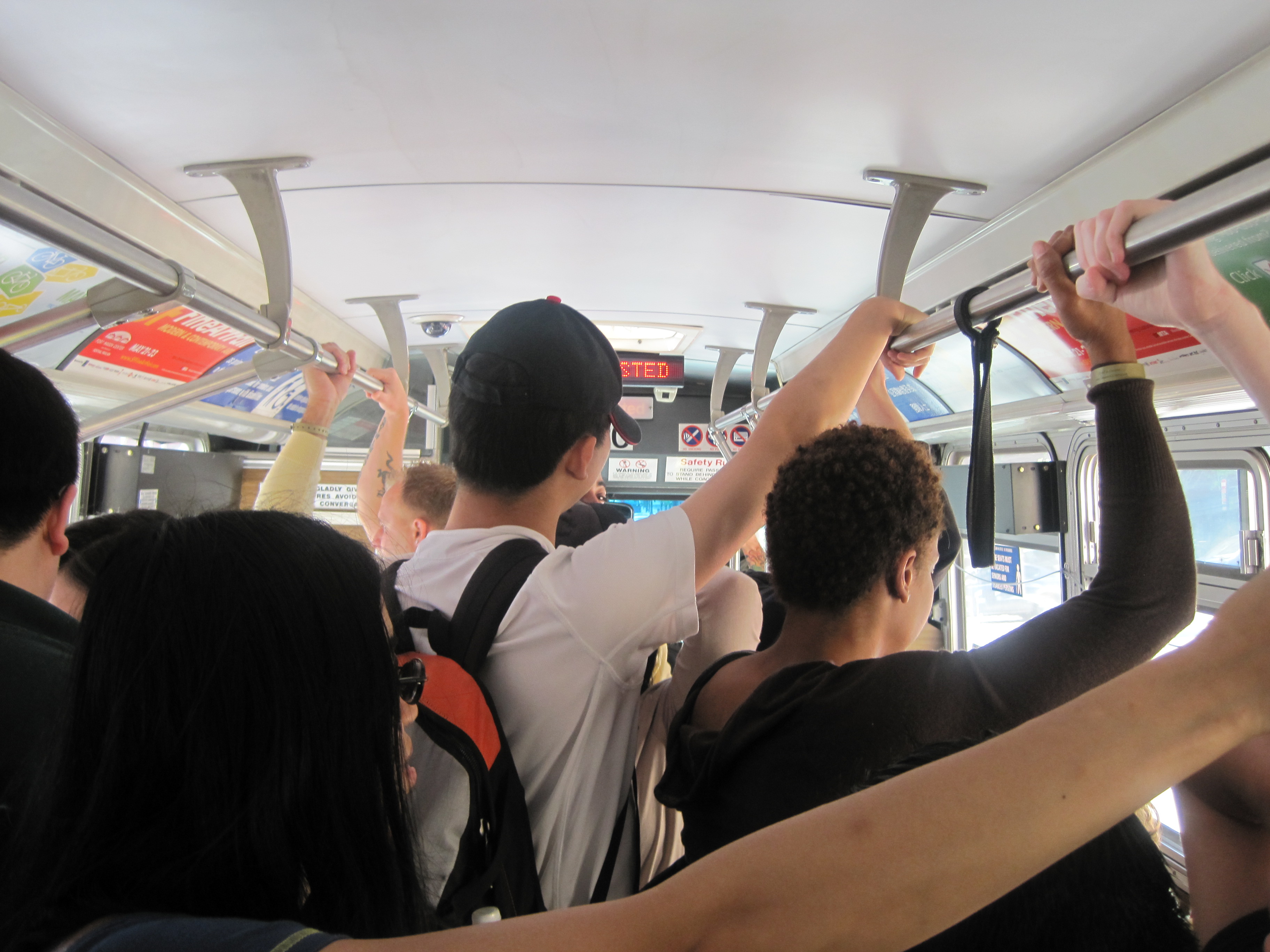 Cooling a crowded bus can be a life saver! 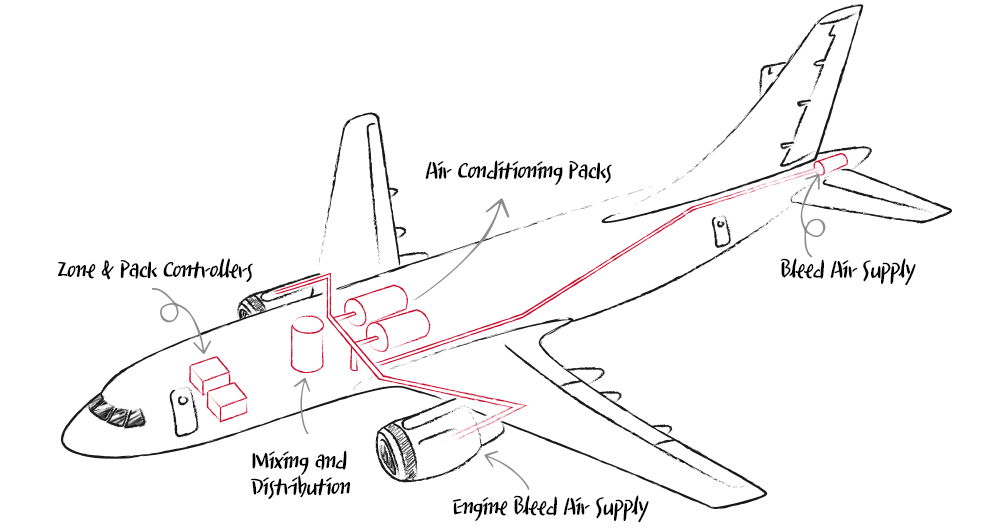 There seems to be a consistent supply of cool air on airplanes, but how do these HVAC systems keep us comfortable? Air conditioning in modern commercial aircraft are primarily operated through 2 types of ECS (Environmental Control System). Simpler ACM (Air Cycle Machine) systems are ideal for large turbine aircraft with a plentiful supply of bleed air, or air compressed by the turbine, to be used as a medium for cooling. Less expensive VCM (Vapor Cycle Machine) systems use special refrigerants for cooling and are better suited for aircraft with limited engine air bleed capacity. On large aircraft, the heating and cooling system components are all combined together in what is known as an air conditioning ‘pack’. The pack will include components such as a flow control valve, a by-pass valve, controllers, a mixing unit and the ACM or VCM.

Vapor condensing from cool air entering the cabin of an airplane 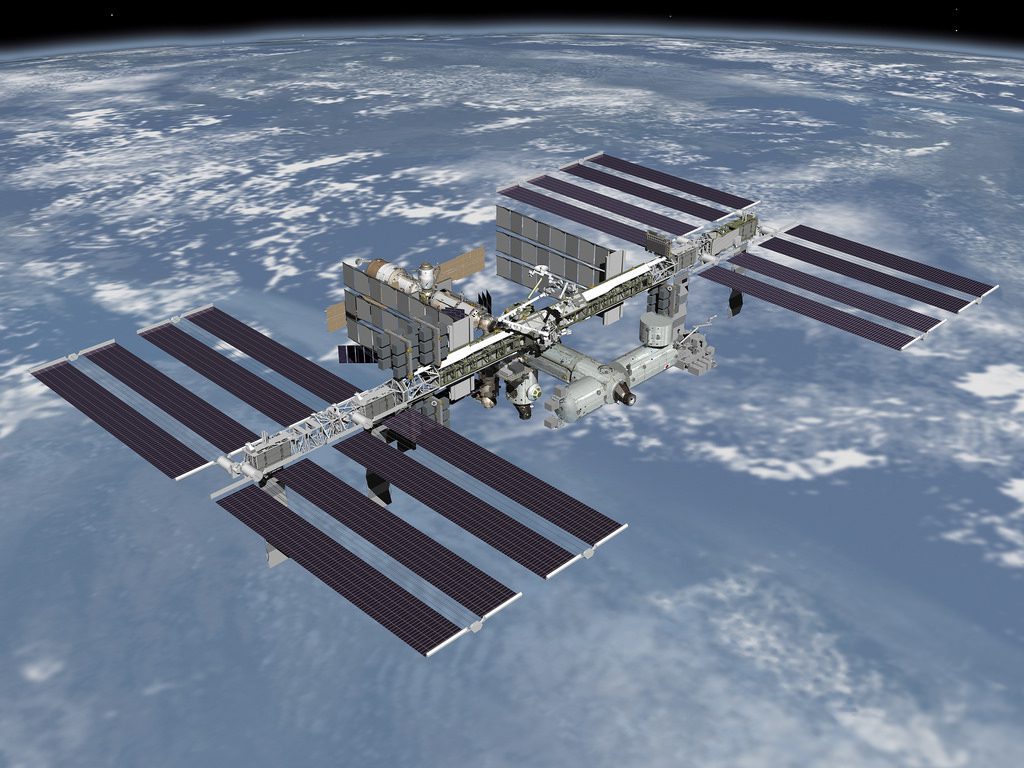 The HVAC systems above are all systems we have frequently experienced. But what about HVAC…in space? Space shuttles and stations like ISS also need climate control to keep their occupants comfortable and safe. To begin with, MLI (Multi Layer Insulation) plays a major role in thermal regulation on a spacecraft. MLI limits the level of heat transfer with the help of thin layers of reflective material. Compact fluid loop heat exchangers run with mechanical pumps are effective in controlling the thermal environment on spacecraft and have advantages such as flexible integration into other systems, stability, controllability and the capacity to handle high variations in temperature including extreme heat. Small electric heaters are also used throughout spacecraft to supply heat as well as strategically placed mirrors outside the spacecraft that direct sunlight into the ship through windows to distribute heat to the occupants. 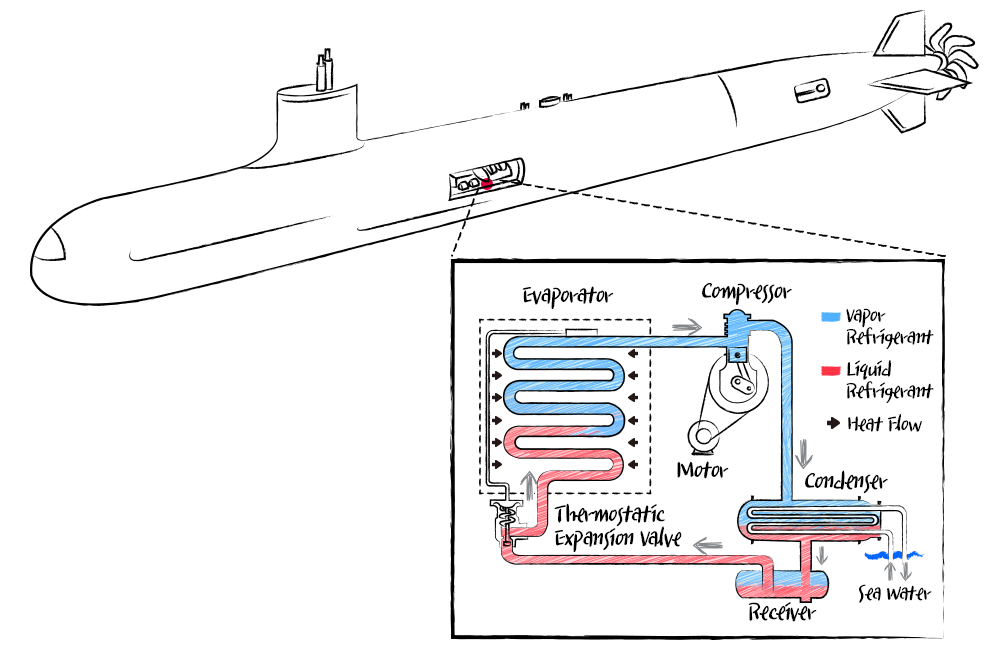 The basic working of a submarine HVAC system

Let’s also take a journey under the sea to have a look at how cooling is managed in submarines. There is only a small amount of space for occupancy in a submarine, but within the inner hull, heat is constantly being produced by elements such as engines, storage batteries, stoves, electric lights and even people. With this heat, moisture is also continuously being produced. Only a few cubic feet of space is available for housing air conditioning equipment, but air conditioning is crucial not only for the comfort of the occupants but to control this level of moisture. The temperature at which the air becomes saturated with moisture is called the ‘dew point’ and this dew point must be managed to limit the amount of moisture on board the submarine. To achieve this, air from inside the submarine is drawn by fans into an evaporator that removes moisture from the air and that water is drained away and stored in a tank away from the internal environment of the submarine. The drier, cooler air is returned to the interior of the submarine for a drier and cooler environment. 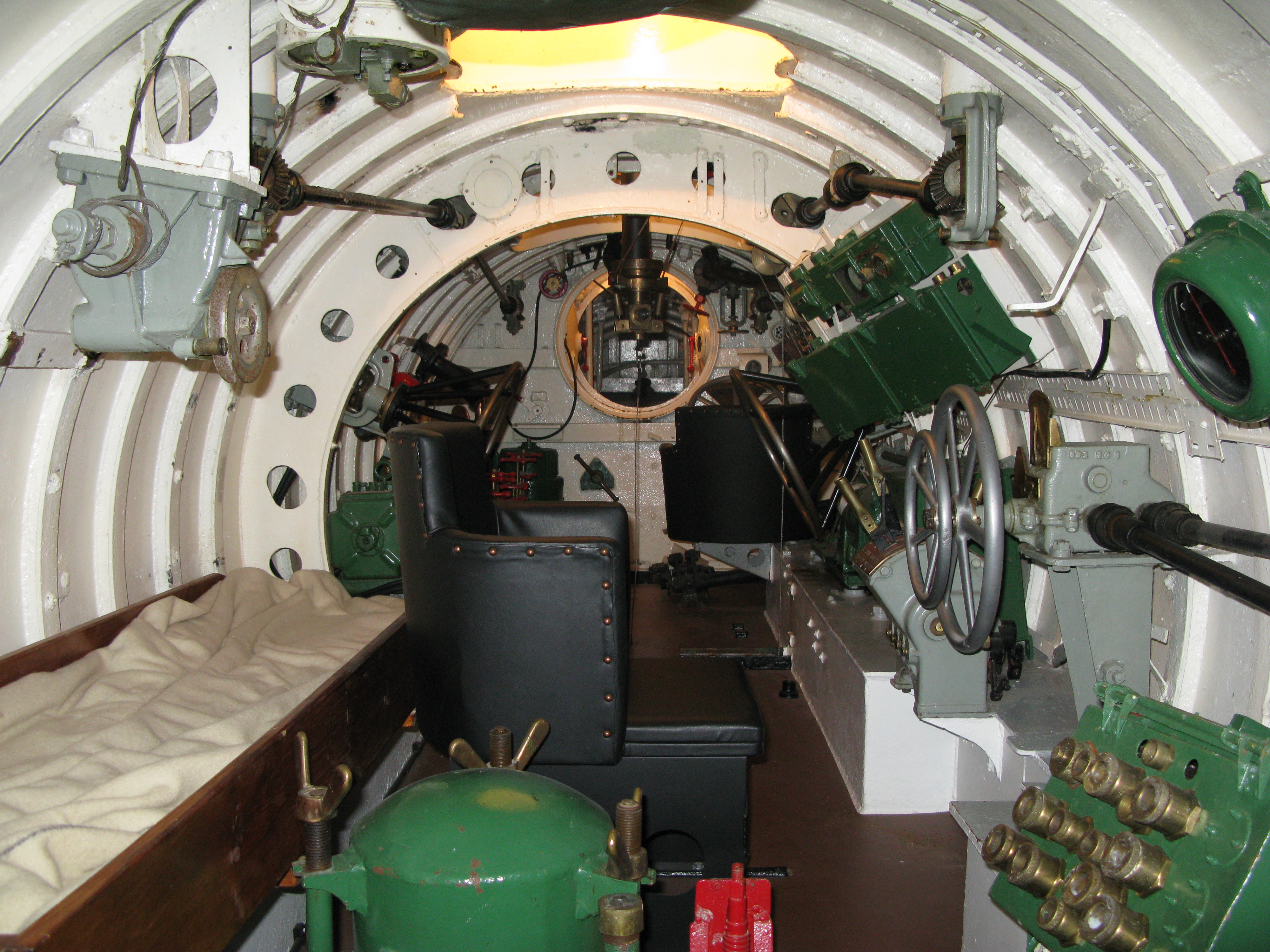 Air conditioning can be found in places we may have never even considered before. HVAC systems on our many forms of transportation have truly changed our daily experience. The next time you’re making your commute, keep your cool. Just remember there are people taking advantage of similar HVAC technology deep beneath the sea or even out in space!

Post Views: 36,930
*Products and solutions may vary according to country and operating conditions. Please click the 'INQUIRY TO BUY' banner below to contact your local LG office for further information on solutions and products.
LG Smart Cassette Previous
Myanmar Looks to Become Leading Marine Logistics Hub in Asia with LG Air Solution Next