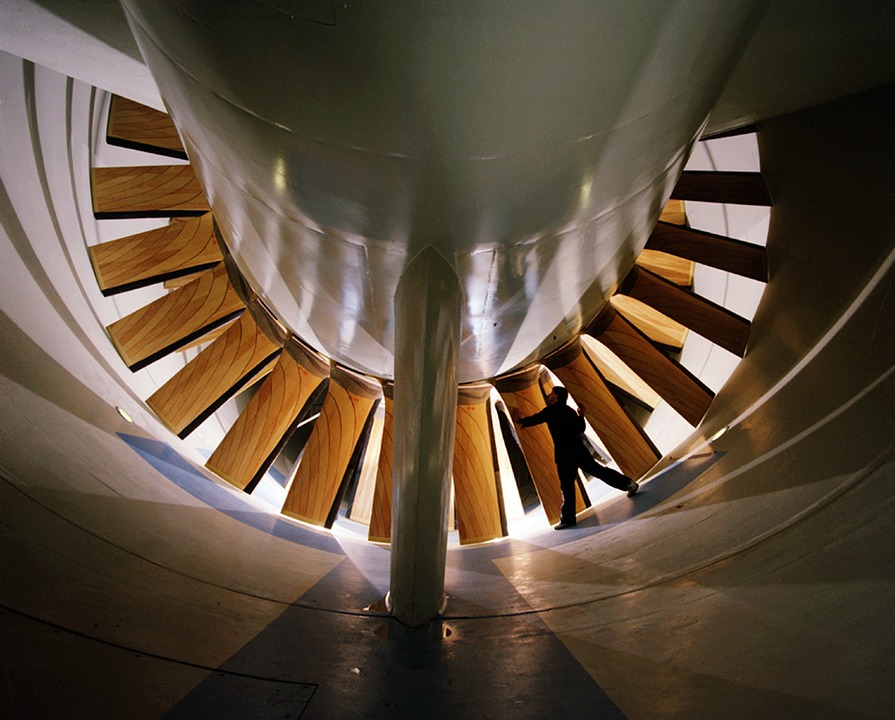 When designing an airplane, there are many factors to consider in order to create a safe and efficient machine and one of the most important factors to evaluate in the design process is aerodynamics. But how can we test the aerodynamics of the plane without putting the plane in the air? This is where facilities known as wind tunnels come into play. In actuality, wind tunnels are utilized to assess the aerodynamics and efficiency of everything from architecture and fans to cars and aircraft. The fans in HVAC solutions provided by LG are also tested in special facilities to ensure that their unique characteristics are supplying the most efficient and effective airflow possible. Let’s take a look at the wind tunnel technology that makes our planes faster, our buildings safer and LG HVAC systems more efficient.

The basic principles of aerodynamics on the wing of a plane

To better understand wind tunnels and their purpose, we should first discuss aerodynamics. Aerodynamics is the study of the way gases (the air) interact with moving solid objects. The word itself comes from two Greek words: aerios, concerning the air, and dynamis, which means force. Humans have been interested in aerodynamics for thousands of years as we can see from well known ancient stories such as Icarus by Diodoris. The principles of aerodynamics can essentially be described through 4 basic forces: lift, drag, thrust and weight. Aerodynamics is easily observed through the air flowing over the wing of a plane. As a plane moves through the air, it creates low pressure above the wings and causes the wings to be lifted or ‘sucked’ up by the pressure difference above and below the wing. This phenomenon is what makes flight possible.

To put it simply, wind tunnels are tube shaped facilities that allow designers and engineers to test how air passes over an object. They come in different configurations and sizes with the largest located at the NASA Ames Research Center in California. As illustrated in the figure above, there are 4 basic components to a wind tunnel. The ‘contractor’ works as an air funnel to streamline the air before it passes over the test subject. The ‘test section’ is where the test subject and instruments for measuring are located. The ‘diffuser’ does just as its name implies and diffuses the air stream as it exits the test section. Finally, the motor and fan components are what draw the air into the wind tunnel and maintain the airflow for testing. The fan pulls air into the tunnel and the air stream blows against the test object fixed within the test section after passing through the contractor. The air stream is then monitored and measured to determine effects of the object on the air stream. The data is then collected and analyzed so that the test object can be streamlined and the aerodynamics of the object can be optimized. In addition to aircraft and spacecraft, aerodynamic studies in wind tunnels have been highly profitable for solving design problems in fans, automobiles, boats, trains, bridges, and building structures.

Wind tunnel tests are also performed to precisely measure the air movement of fans at a specific pressure. LG implemented wind tunnel technology in their R&D fan chamber to develop the biomimicry axial-flow fans found in their HVAC products. Humpback whales are able to glide smoothly through the water due to humps on their backs that reduce drag. Clams are also able to avoid drag and keep from being swept away by ocean currents thanks to the grooves on their shells. These biomimicry features were developed, tested and implemented by LG to the fans that power the airflow in LG HVAC products using air tunnel technology. Through these applications, LG axial-flow fans demonstrate a 10% increase in flow rate, a 20% increase in energy conservation and a 2dB reduction in sound emission.

Wind tunnel technology has an impact on many of the machines and objects we use everyday. And now you know, it even went into supplying cool air or heating to you as you read this now. Our cars, planes, bridges, buildings and even HVAC systems all benefit from wind tunnels and so do we!

Post Views: 15,660
*Products and solutions may vary according to country and operating conditions. Please click the 'INQUIRY TO BUY' banner below to contact your local LG office for further information on solutions and products.
LG Air solution VRF Case study_Brazil Syrian-Lebanese Hospital Previous
Season's Greetings from LG Air Solution Next