When hybrid cars first appeared, consumers weighed their environmental benefits against a general perception that eco-friendly vehicles were less capable than their oil-powered counterparts. However, rapid improvements to hybrids and electric cars soon gave rise to a new wave of automakers that seek to redefine popular opinion around environmentally friendly vehicles. After all, compare modern trains to coal powered locomotives and no one questions which one is more powerful. While a great deal of progress has been made in developing eco-friendly transportation and energy sources, another market that has seen incredible changes is the construction industry, where eco-friendly offices and homes are all the rage.

Being Green: Not Just for Environmentalists Anymore

Increasing environmental awareness has raised the eco-consciousness of many consumers around the world. However, even consumers that are not motivated by environmental concerns can still benefit from eco-friendly improvements to their homes or offices. For advocates of energy independence, the recent crisis in Ukraine illustrates the danger of relying on a single supplier for a resource as important as natural gas. As relations between Russia and Europe become more strained, there exists a very real danger of gas supplies dwindling when they are needed most. In order to combat this threat, homeowners across Europe have installed air to water heat pumps (AWHP) and taken other steps to make themselves more energy independent.

For those whose hesitation to invest in eco-friendly products is not dampened by the moral appeals of the Green movement or the current state of geopolitics, the desire to reduce monthly energy bills remains the most attractive reason to take the plunge. Though they more than pay for themselves in the long run, the high initial cost kept people away from solar panels, AWHPs and other environmentally friendly technology in the past. But in addition to the upgrades that have increased the effectiveness of these technologies, there has also been a steady decline in their price. Recently, governments have stepped in to offer tax credits and other incentives to homeowners who install environmentally friendly technologies. Combined with the dropping prices of green technology, these government benefits have lowered the final barrier for many who sought out ways to improve the efficiency of their homes and offices but lacked the financial means.

The shift away from gas and oil for heating has been driven by AWHPs, an exciting technology that many feel represents the next step in renewable energy. An AWHP draws upon heat from the air outside in order to heat water inside the home, allowing it to run effectively on small amounts of electricity. By piping in heat from outside the home, the AWHP is actually able to deliver more heat energy into the home than it takes from the electric grid. For example, the typical AWHP combines 1kW of electricity with 2kW of ambient air to create a total heating output of 3kW, meaning that roughly triple the heat is generated with the same amount of electricity.

Homeowners seeking to go green are typically motivated by a desire to protect the environment, a belief in the importance of energy independence or by the appeal of reducing their monthly energy expenses. LG’s innovative Therma V air to water heat pump (AWHP) fulfills all three of these criteria, making it a natural fit for anyone looking to upgrade their home or office. LG’s Therma V is equipped with a highly effective A-Class water pump which is approximately 65 percent more efficient than conventional water pumps.1 Additionally, the Therma V’s BLDC fan motor offers additional energy savings of up to 40 percent when running at low speeds and 20 percent at higher speeds when compared to AC motors.2 The system is fully compatible with radiators, domestic hot water cylinders and solar panels, giving it unrivaled installation flexibility. By lowering a building’s carbon footprint, its reliance on electricity and monthly energy expenses, LG’s Therma V is perfect for anyone looking to go green – whatever their motivation. 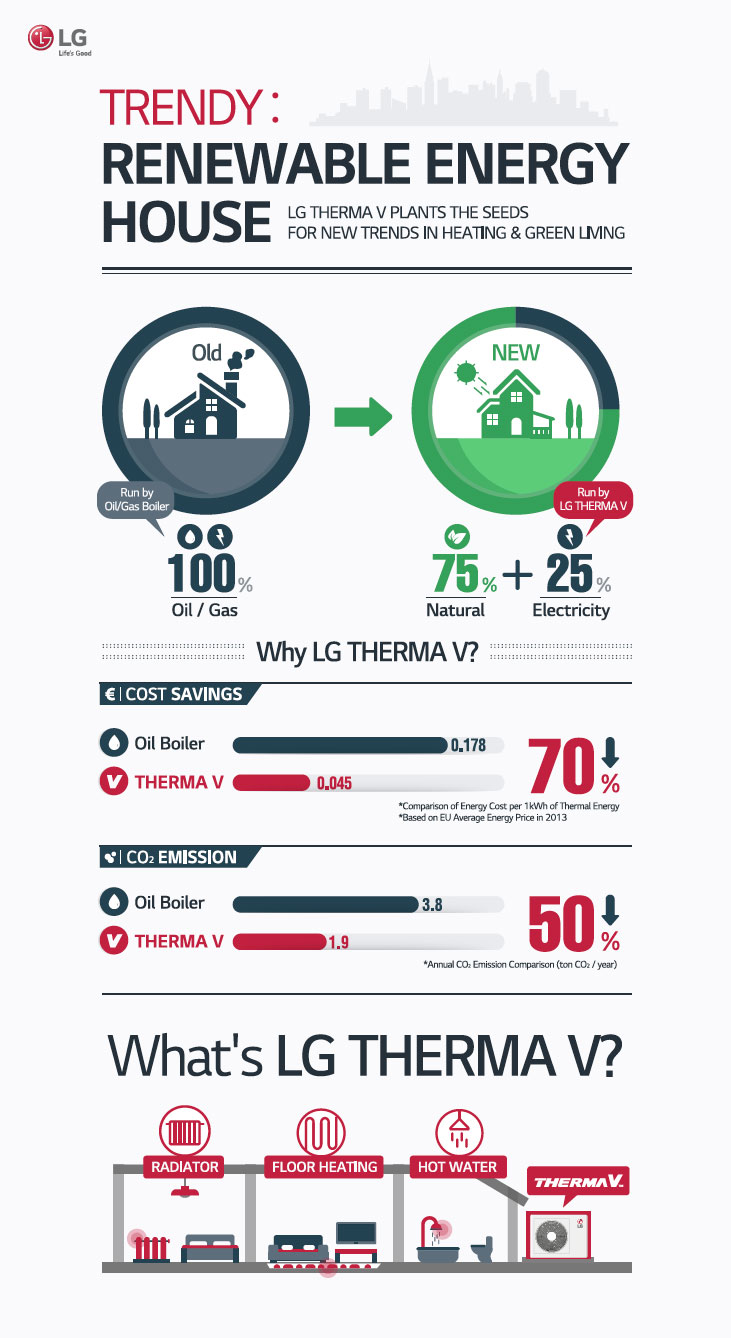 1. Based on laboratory tests conducted by LG. The power input savings of conventional water pumps (234 kWh/year) and A-Class water pump (81kWh/year) were compared under the following conditions: The machines were left running for 12 hours a day, 30 days a month for 5 months.

2. Based on labratory tests conducted by LG

Post Views: 1,902
*Products and solutions may vary according to country and operating conditions. Please click the 'INQUIRY TO BUY' banner below to contact your local LG office for further information on solutions and products.
LG Air conditioner with Mosquito Away Technology Previous
CAD Simulation Tool for Direct Expansion Systems Next