The Festival Must go on: India's Rainy Season

The rainy season in India is in full swing and while the heat and humidity can be hard to bear at times, the season has other implications for Indian people. This is also a season of celebration with some major festivals taking place in August such as Janmashtami, the celebration of the Hindu god Krishna, and Indian Independence Day, the reserved for celebrating India’s independence from the UK. 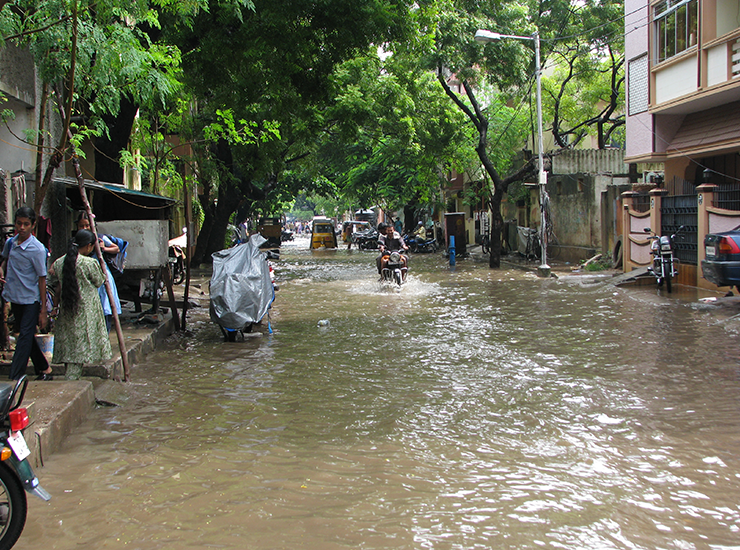 A flooded street in Chennai, India (ⓒWikimedia by McKay Savage)

The term ‘monsoon’ itself first cropped up in the English language in British India where it was used to refer to the strong summer winds that bring heavy rainfall to the area. India has the most dramatic monsoon in the world and the rainfall and humidity cover the entire country during the summer months. Many people in India are dependent on the monsoon rains to replenish crops and sustain life and some people even refer to it as the life-blood of the Indian economy. Two-thirds of Indians are dependent on farming for income and over 40% of them have no form of irrigation to bring water to their crops, which makes the monsoon rains essential to their survival. Millions of farmers depend on these rains and half of India’s farm output comes from summer crops dependent on the monsoon. For good agricultural output, the rains need to be evenly distributed across the Indian states and these rains also replenish 81 nationally-monitored water reservoirs, which are vital for drinking water, power, and irrigation.

Even though the monsoon has an important role in India and Indians have adapted their life to the monsoon seasonal changes for a very long time, the monsoon can make everyday life difficult. Morning commutes can take twice as long during the rainy season and social life becomes entirely dependent on the whims of the weather. In monsoon, houses require constant cleaning due to the mud that is tracked in from puddles caused by the rain and clotheslines full of wet clothes also start showing up everywhere throughout the house. However, the Indian people know how to balance their lives during the season and enjoy the festive atmosphere in August. 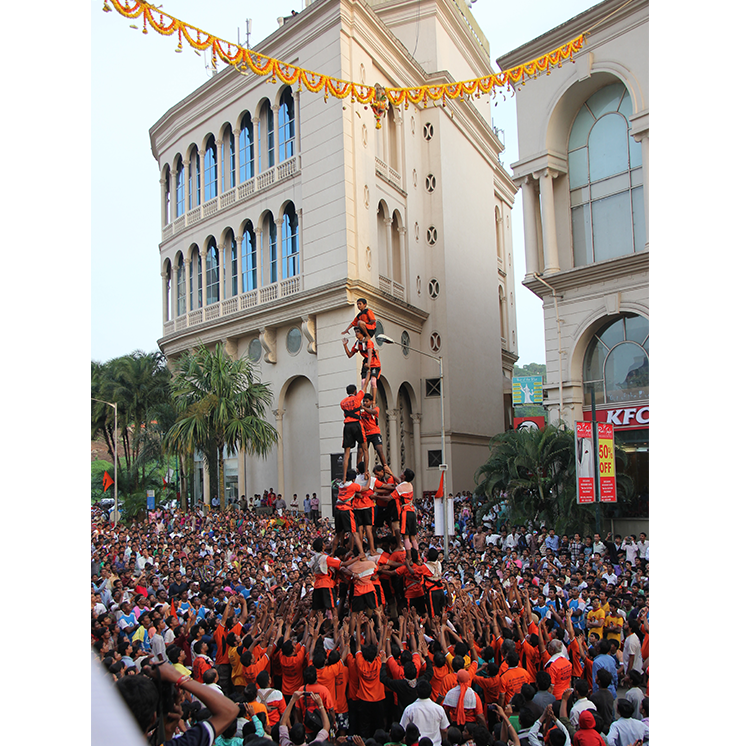 A human pyramid to reach the Dahi Handi (ⓒWikimedia by AKS.9955)

The festival commonly known as “Janmashtami” is the sacred occasion that marks the birth of Lord Krishna and there are various customs and rituals associated with the celebration of Janmashtami.

A day long fasting is commonly held that last up until midnight when Lord Krishna was born. And even after that, many people tend to partake of only milk and milk products as these are considered to be the favorite of Lord Krishna. The most well-known ritual is called “Dahi-handi.” It is an enactment of Lord Krishna trying to grab butter from a pot and this ritual is most popular in the cities of Mathura, Dwarka, Vrindavan, and Mumbai. A pot is suspended at a height of some 20 feet and groups boys form the shape of a pyramid in order to reach up high enough and break the pot. People gathered at the base of the pyramid throw water on the boys to prevent them from reaching the pot. This tradition of Dahi-handi brings a very festive mood and it is believed to thwart off negative sentiments and welcome prosperity and happiness.

On the same day, which is the 15th of August this year, the Independence Day of India is celebrated across the entire country. Flying kites in India on this day is a symbol of Indian independence. So, on this day, the skies throughout India are filled with countless kites of various shapes and sizes on Independence Day.

This relentless rainy season can make life uncomfortable but the rains in India replenish crops and sustain life. People make sure they enjoy the festive atmosphere in August all across India. Festivals continue to carry on in India even on rainy days. If you ever get the opportunity, be sure to experience on of these festivals and see what the rainy season of the monsoon is like for yourself.

Post Views: 2,901
*Products and solutions may vary according to country and operating conditions. Please click the 'INQUIRY TO BUY' banner below to contact your local LG office for further information on solutions and products.
Make the Most of Your Summer Previous
[MULTI V] LG HVAC Hospitality Solution Next