Many of you probably remember a scene from the Seven Year Itch (1955), where Marilyn Monroe’s skirt gets lifted up by the subway ventilation. This scene makes me think of a different kind of wind also commonly observed in cities called the skyscraper wind effect (SWE). It refers to a strong wind that hits a skyscraper and turns into a sudden downdraft, which then swirls up or moves from one side to another rapidly. Today, we’ll learn about this SWE in detail.

The wind generally gets weaker (green lines) when it hits a building, but a sudden gust of wind can be created (red lines) around narrow spaces such as building corners or between two buildings. (Source: NASA Ames NAS)

Some people may think that the speed of the wind might reduce in downtown areas where buildings are close to each other, but the wind actually becomes much faster and stronger when it hits a building.
This phenomenon is quite easy to understand when you think about Bernoulli’s theorem, a physics theory on how wind pressure drops and the speed increases when it moves from a large space to a tight space. It’s similar to water streams which flow faster in narrow valleys compared to in wide rivers.

“Watch out for skyscraper winds!”

SWE creates air currents much stronger than we might think possible, with speeds up to 20-30m/s. Given that the speed of the wind a healthy adult can handle is about 24m/s, the wind created by SWE indeed has the power to “blow you away”.
For your information: How strong winds affect us
At 10.8-13.8m/s: Difficult to hold an umbrella against the wind
At 13.9-17.1m/s: Hard to walk and signs on buildings start to be destroyed
At 17.2-20.7m/s: Smaller branches break from trees
At 20.8-24.4m/s: People can’t move and roofs get torn apart

Architects have been coming up with numerous ideas to prevent possible damages that SWE can cause. These ideas include making the corners of buildings round, creating wind tunnels in the middle of the building, and installing wind breaking fences or nets.

Eco-friendly methods such as installing aerogenerators on top of or between buildings to utilize potentially dangerous wind as an energy source are becoming especially popular lately. The World Trade Center in Bahrain installed wind turbines between two buildings to generate energy from the strong wind blowing at 240 meters high. These turbines can generate about 1,300MWh annually, which is about 15% of the entire expenditure of the building.

Another example can be found from Strata SE1 building in London, which has three holes on top with turbines for generating electricity. These turbines on top of the 148m-tall building covers 8% of the total energy expenditure, while giving the building a very special, eye-catching design.
Skyscraper winds affect rooftops as well. Sometimes outdoor air conditioner units experience performance degradation when strong winds stop them from venting out heat. This leads to lowered cooling efficiency and higher air conditioning cost.

LG came up with an excellent idea to prevent damages that can be caused by SWE. The lower front part of the outdoor unit vacuums wind in and then redirects it through the left and right sides of the upper front. Due to the angle being kept at 45°, skyscraper winds no longer affect an outdoor unit’s performance. 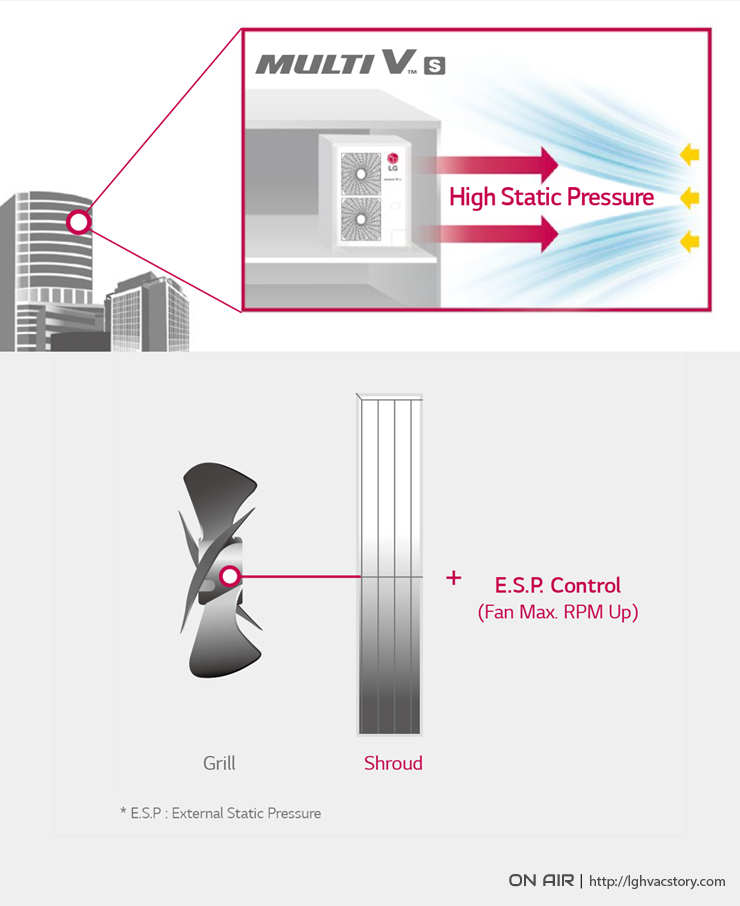 Today, we learned about what SWE is and what kind of methods have been applied to buildings and products to minimize damages caused by it. There are still quite a few issues to solve such as noise, the unpredictable direction of winds, and the possibility of strong warm currents which may push structures off of buildings.
Yet scientists still believe in the prospects of skyscraper wind utilization. The noise can be overcome through better designs and production techniques, and the issues caused by the changing directions of the wind can be solved by building vertical axis turbines instead of the existing horizontal axis turbines. I look forward to seeing more ideas to prevent SWE damages and maximize SWE utilization.

Post Views: 4,653
*Products and solutions may vary according to country and operating conditions. Please click the 'INQUIRY TO BUY' banner below to contact your local LG office for further information on solutions and products.
The Effects of the Unseen Previous
The Modular Mix That Keeps Us Cool Next