Cooling Technology Heats Up the League on Ice

With hockey season in full swing, fans will be swarming to hockey arenas around the world to cheer on their teams and watch the players glide across the ice. Hockey is an extremely fast-paced game with some of the fastest players recording speeds just short of 30mph (48kph). The slick ice surface of a hockey rink makes these speeds possible, but maintaining the conditions for keeping an ice surface up to the standards required for ice hockey is a meticulous and complicated process. Let’s explore the world of artificial ice surfaces and see what goes into maintaining them. 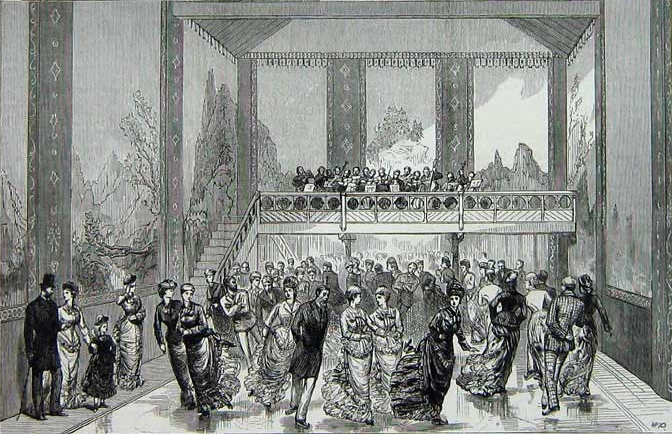 The History of the Surface

The practice of skating itself has been around for thousands of years, but it wasn’t until modern times that we had the capacity to create artificial skating rinks indoors. While the artificial skating rink dates back as far as 1844, the initial rendition had a crucial flaw. Since the ice was not able to be maintained in sufficient quantities for a skating rink, the glaciarium constructed in London in 1844 used pig fat and salts to replicate an ice-like surface for skating. The glaciarium offered a quaint and novel experience, but the stench that arose from the pig fat ultimately led to the demise of the project. It wasn’t until 1875 that the first indoor ice hockey game was officially recorded in Montreal, Canada. Two nine-member teams took the ice using a ‘puck’ made of wood. The reason a puck was adopted instead of a ball, which was common at the time, was to keep it on the surface of the ice so that it would not elevate into the stands and injure spectators.

Ice hockey rink refrigeration has come a long way since the 1800s. There are strict requirements for ice surfaces that must be adhered to in professional hockey leagues around the world. The NHL is the premier ice hockey league in the world with a current roster of 31 teams that each play 82 games during regular season play as of the 2019-20 season. An NHL rink surface typically requires 12,000 to 15,000 gallons of water. If the ice is too thick, the top layer will be too soft and impede the speed of the players as they skate. If the ice is too thin, players will cut through the surface with their skates. Temperature and humidity must be precisely controlled to meet the stringent standards. The typical ideal ice surface for an NHL rink is 24-26°F, while the indoor arena temperature is approximately 63°F. The ideal indoor humidity is 30%. Even small changes to these conditions can make a big difference. For example, if the humidity level is too high, fog can form over the surface of the ice that impedes visibility and poor ice conditions can seriously affect player performance.

There are many factors that must be considered in order for an HVAC system to maintain the necessary environment for an ice hockey rink. Competitors on the ice and spectators in the stands add heat and humidity to the arena in close proximity to the ice. Lighting and other equipment in the arena also contribute to higher temperatures inside. The outdoor temperature and humidity come into play as well with the hockey season stretching from mid-autumn to late spring across a diverse range of regional climates. During the hockey season, other events such as concerts and conventions and even professional basketball games are also held on top of a platform over the ice. Through all this, the HVAC system must be meticulously controlled and monitored to ensure conditions are suitable for when the puck drops at the next hockey game. An effective and efficient HVAC system along with advanced energy and temperature simulation and analysis is essential to get the ice surface right in each individual hockey arena. 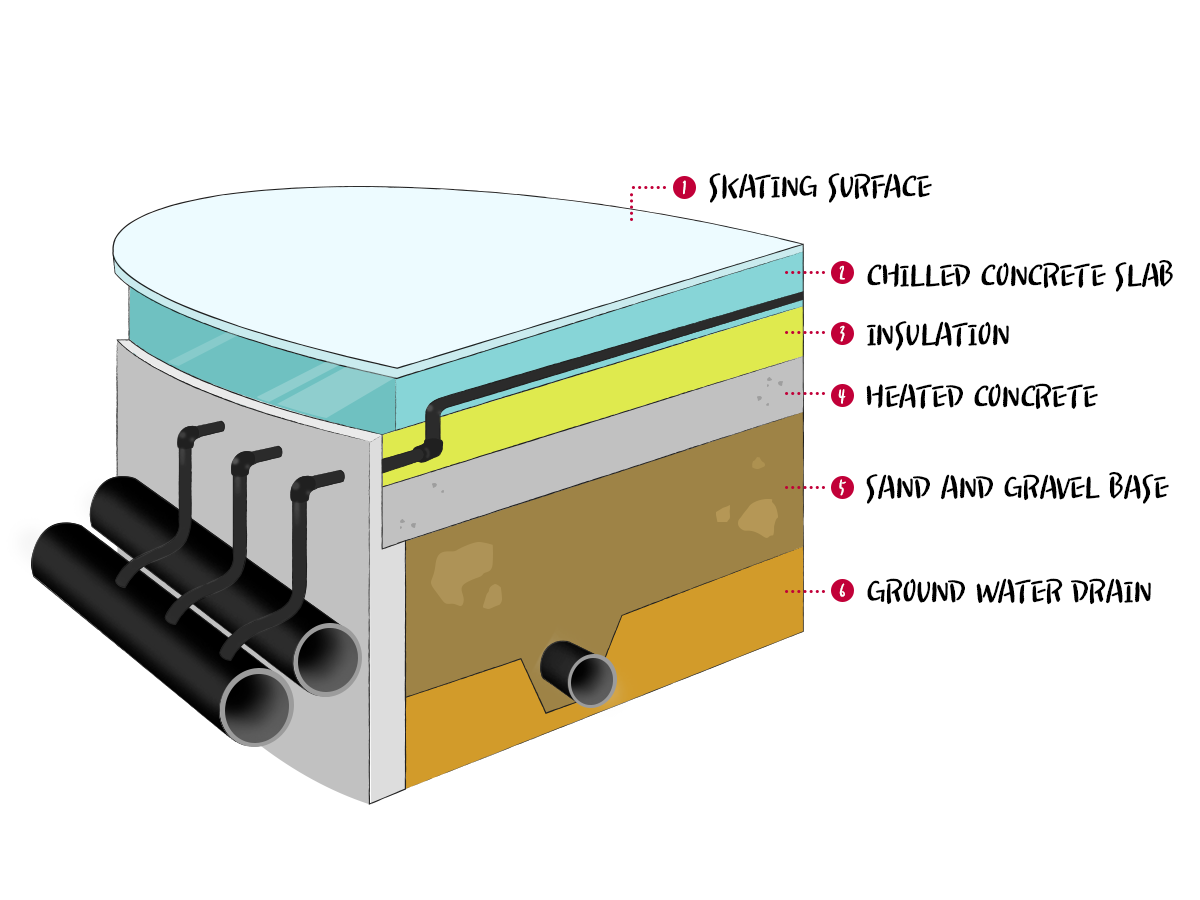 The system for maintaining the surface of the ice is complex

The ice surface itself is made up of several layers that include the skating surface, a chilled concrete slab, an insulation layer, a heated concrete layer, a sand and gravel base, and, finally, a drain at the bottom. A chiller system is used to cool brinewater and pump the brinewater through metal pipes in the chilled concrete slab. This configuration is the structure for maintaining the temperature of the ice. The skating surface sits on top of the concrete slab and the temperature of the brinewater travelling through the concrete slab freezes and melts the ice as needed. The heated concrete slab beneath the insulation layer keeps other layers below it from freezing and becoming damaged. The sand and gravel base has a drain at the bottom to allow the water to be drained when it is time to remove the ice rink. This is a complex process but it must be maintained for 1,271 games during the NHL regular season alone, not to mentioned the other professional, amateur and collegiate levels games taking place throughout the hockey world. 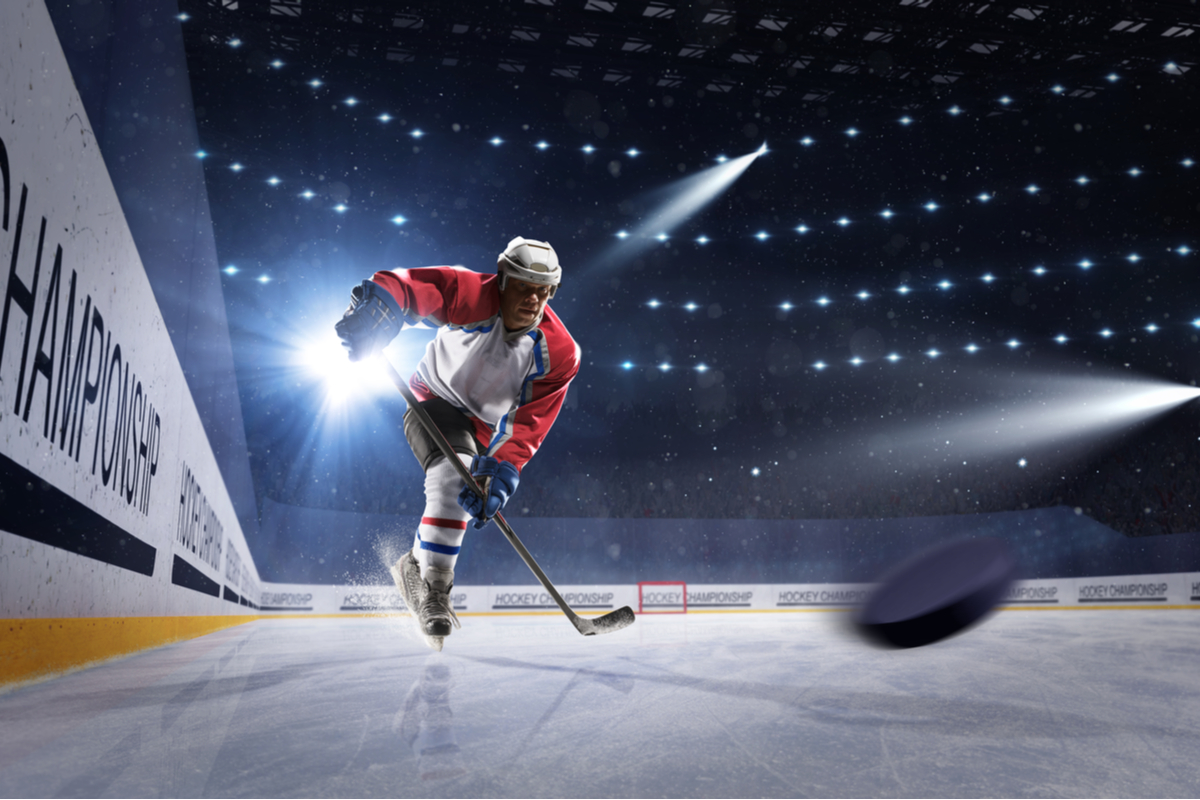 Maintaining any heating and cooling system can present a challenge and maintaining a hockey rink is even that much more complicated. The next time you’re down at the arena supporting your local team, imaging the complex system at work under the ice and in the arena to make ‘the fastest game on ice’ possible. All the sounds of skates gliding on the ice and sights of colliding bodies of players as they scramble for the puck are all thanks to the innovations of this unique cooling system implemented at hockey arenas everywhere.

Post Views: 7,276
*Products and solutions may vary according to country and operating conditions. Please click the 'INQUIRY TO BUY' banner below to contact your local LG office for further information on solutions and products.
LG HVAC strengthens its brand recognition with a launch in Azerbaijan Previous
HVAC: The Industry that Keeps on Booming Next