Something is not great because it lasts through the ages, something lasts through the ages because it is great. There is deep meaning to be found in examining a place that has lasted for generations. With this blog, we hope portray to our readers the significance of Korean historical sites where LG Air Conditioning is making a contribution. Some of these places include the 600 year old Andong Gunja Village and the vestige of Korean art and culture, Choi Sunu House. So our voyage begins into places where the winds of tradition meet in harmony with the refreshing breeze of modern innovation.

I was on my way to visit Gunja Village located just outside of Andong in the South-East of the Korean peninsula. The purpose of my trip was to admire the architectural innovations of the people who established this site hundreds of years ago. I left the busy streets and high-rise apartments of Seoul behind and headed South past the farms and sprawling mountain ridges that cover most of Korea. 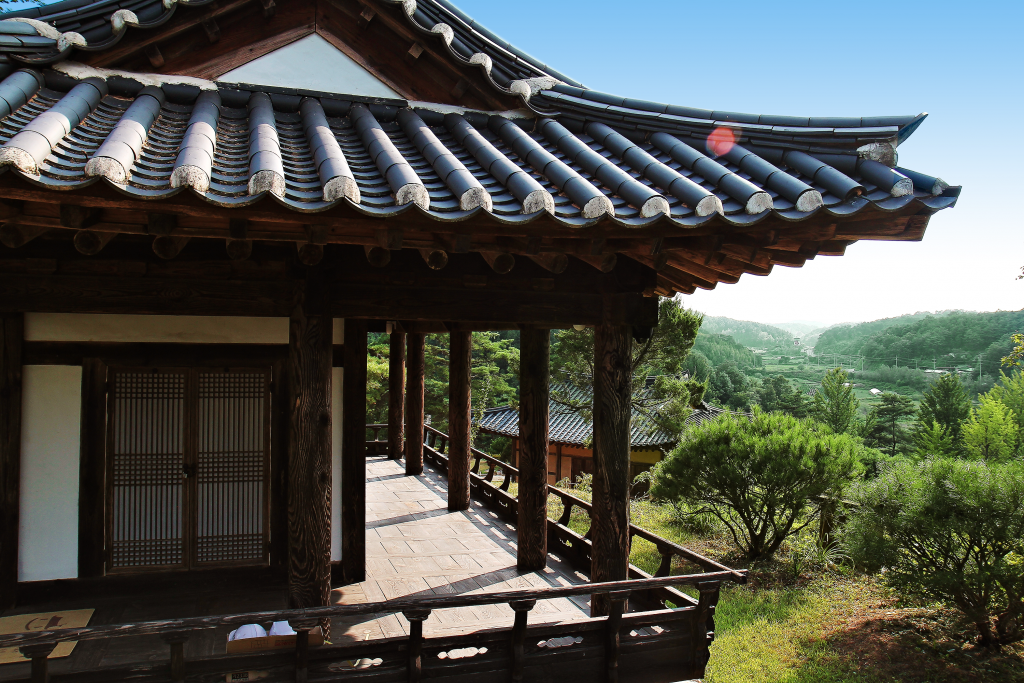 Upon entering Gunja Village, the sun was beating down and I was greeted in the main building with refreshing sliced watermelon and a short introduction to the history of the village. The village was established approximately 600 years ago and some of the structures that stand there now have been around just as long. The architecture of each of the buildings tells a story of the eras in which they were built and the purposes for which they were constructed. Though these homes have stood for generations, I soon became familiar with the unique innovations they possess. 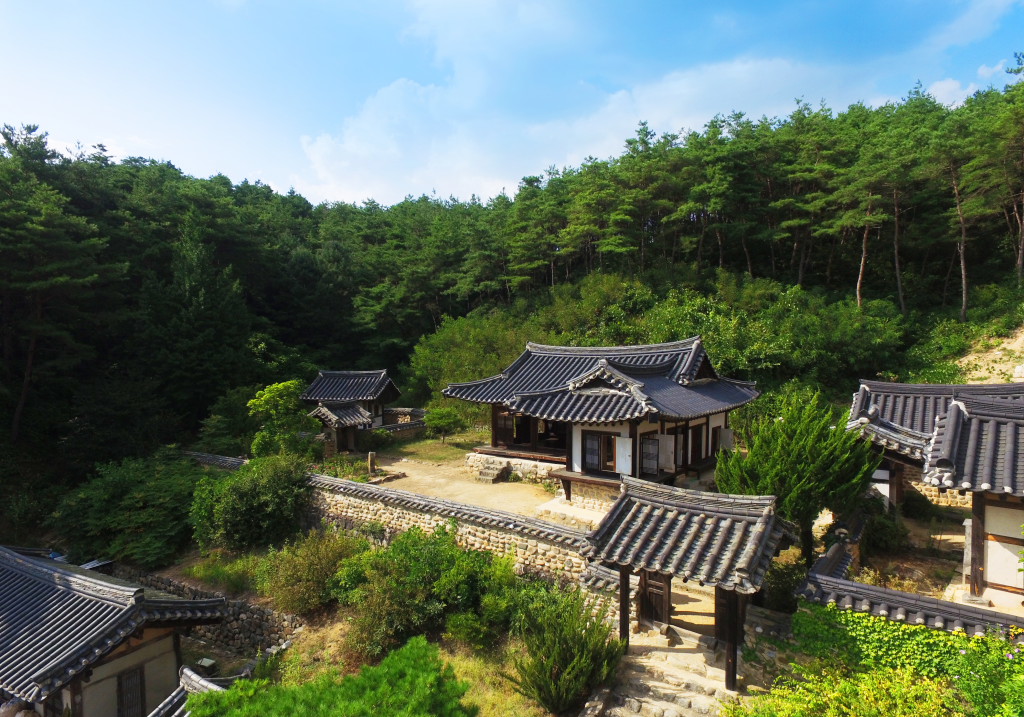 Hanok houses tucked into the hills

The village stands as a living record of Korea’s history and is filled with beautiful architecture and scenes of nature. I moved from the main building out into the village to explore. The Korean peninsula experiences four distinct seasons and the summers are hot and humid. This was a particularly hot day and the sun was fiercely glaring down on the mountainside where the village is set. I wondered how those who lived here over the years stayed cool in the summer without modern air conditioning. As I walked through dirt paths that lead through site, I began to look for shade or a place to cool off. I was pleasantly surprised that the houses in Gunja Village offer a sort of natural air conditioning that keeps their interiors cool. 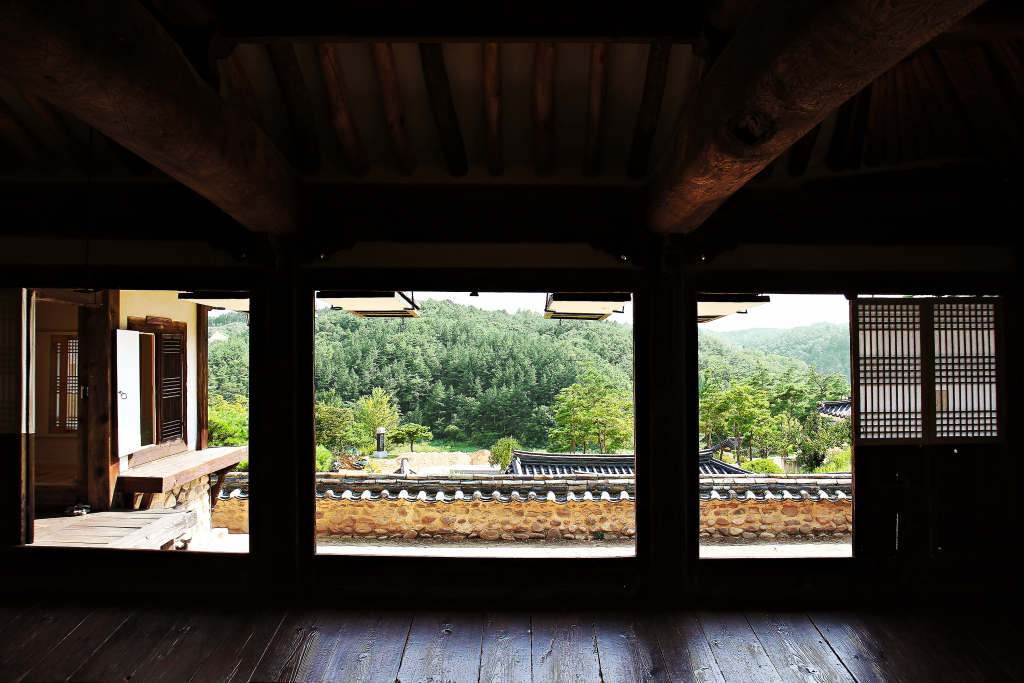 Traditional Korean ‘hanok’ houses are constructed with many unique features to help inhabitants cope with the elements and I was able to experience this first hand in the searing heat on that day in August. The houses in the village are built with windows that open wide on all sides to let the cool breeze from the mountains blow freely through them. The windows are raised up when opened to permit the wind flowing down from the mountain to draft into the homes from every direction. The floors are also raised off the ground so that air blows beneath them and spaces in the floors slats allow the air to rise up into the houses. As I rested in one of the larger structures, I was able to cool off in the breeze and look down over the sprawling valley above which the village is located. I could hear the people who live in the village working in the distance and felt a true sense of what life might have been like here hundreds of years ago. The wisdom of the scholars who built these structures still serves visitors to Gunja Village today. 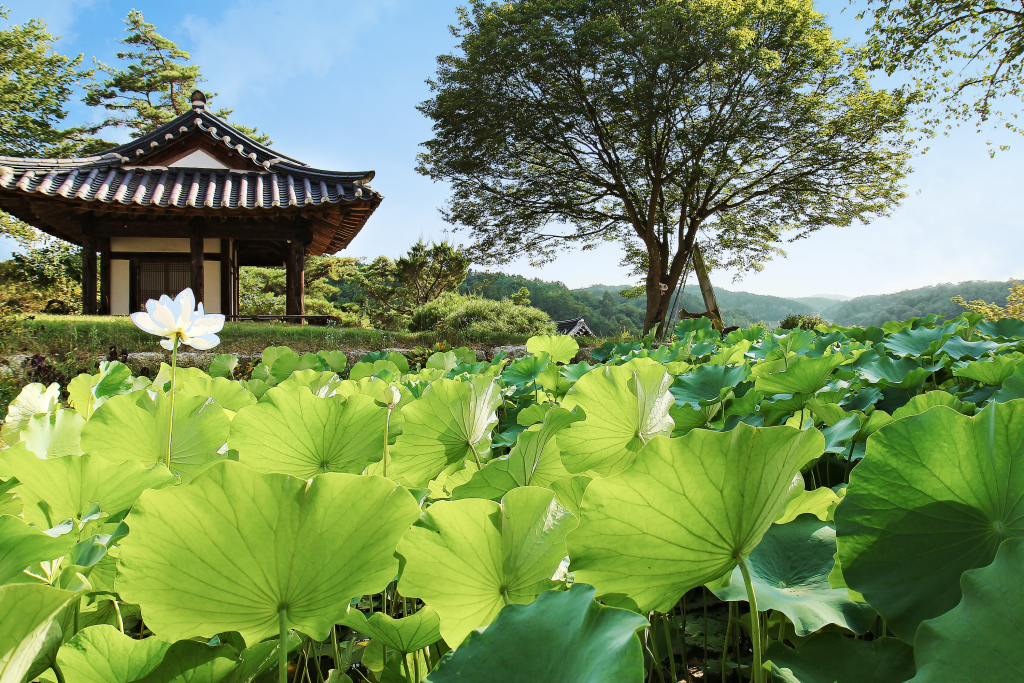 Hanok structure perched above a pond brimming with lilies

My time in the Gunja Village was coming to a close, but I wondered what this place would be like in the Spring when the flowers and trees are blooming or in the Autumn when the mountainside is bright with the colors of the changing leaves. Hopefully, I can return and experience the dynamic yet simple architecture designed by those who lived here over the 20 generations of the village’s existence. The elegance, strength and innovation of the structures in Gunja Village constructed hundreds of years ago made a lasting impression on me.

Editor : Patrick Smith
He has resided in the US and Korea over the past 10 years working in such fields as radiology systems, fuel cell development and advertising. He brings his vast experience in Korean culture and business to help tell our story of heritage and culture. Patrick now works as a marketing director in Seoul.
Post Views: 2,682
*Products and solutions may vary according to country and operating conditions. Please click the 'INQUIRY TO BUY' banner below to contact your local LG office for further information on solutions and products.
LG Air Conditioner : Smart Inverter Installation_Test Running_Smart Diagnosis Previous
Thermal Energy Storage : Like Ice for Your Coffee Next