How The English Handle April Showers

“March winds and April showers bring forth May flowers”
The above is an old saying in England. As you might guess from the saying itself, April in England involves lots of rain. The showers are caused by the strong jet stream coming from the Atlantic Ocean. The weather becomes quite conspicuous, switching from bright sunshine into heavy rain, sometimes getting cold enough to even snow. Weather in England is so dramatic that even English poet T. S. Eliot called April “the cruelest month”.

The type of rain you see in England varies. It ranges from sudden rain strong enough to make you worry that it might break the ceiling to a drizzle that lasts for days. If you’re a fan of the English Premier League, than you probably have an idea of what it’s like, since it’s pretty common to see uniforms get completely wet during games due to rain.

How the English Handle April Showers 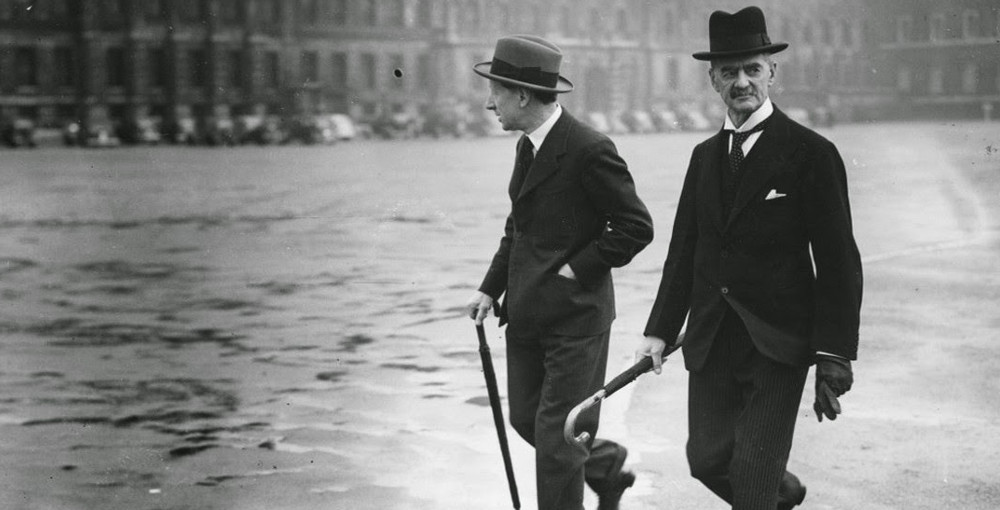 The ideal image of the classic English gentleman is possibly Colin Firth’s character in King’s Man, in his suit holding a long umbrella. Although many people think classic English gentlemen carried umbrellas in case of sudden rain, they were actually used as accessories. The English felt that long umbrellas matched their suits very well, but open umbrellas completely ruined the silhouette of suited gentlemen. For that reason, it was quite common to see men who would rather walk in rain getting their suits soaked than use their umbrellas.

Present day people in England also don’t do much when it rains as they would rather just let themselves get soaked. All they have on them is usually a hoodie, even in heavy rains. It seems quite ironic that England is the origin of rain coats and rain boots.

Correlations between Rain and Mood

Many people suffer from depression in England due to the frequent rains and lack of sunshine leading many researchers to study the correlation between rain and depression. Robert Burton, a British Anglican Bishop, wrote “as a black and thick cloud covers the sun, and intercepts his beams and light; so doth this melancholy vapour obnubilate the mind” in his book The Anatomy of Melancholy published in 1621.

Experts say that the level of melatonin, a type of hormone secreted in dark environments, increases during rainy season, and this can lead to a perturbed biorhythm and depression. The acute symptoms include insomnia, lethargy, loss of appetite, despondency, social maladjustment, panic, loss of sexual drive, and caprice. On top of that, depression can also weaken one’s immune system, making them more susceptible to other diseases. This is how mental illness can actually lead to physical illness as well. 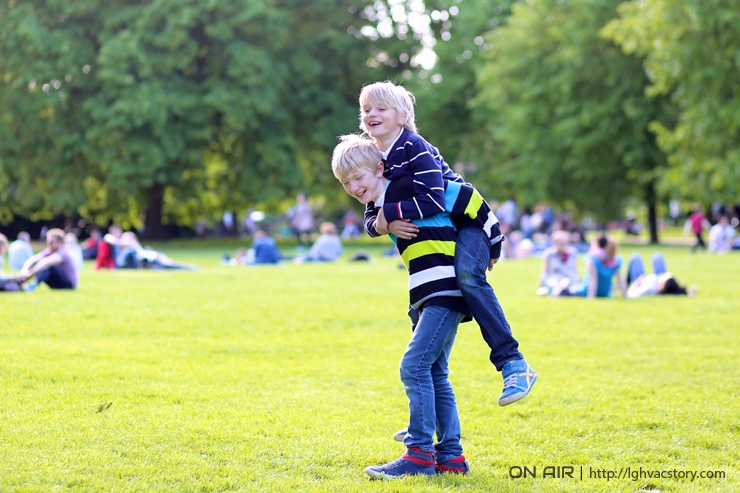 Children having fun at the park

To relieve symptoms caused by depression, it’s important to increase your serotonin level, which is secreted when you’re exposed to sunlight. The role of sunlight is so important that some people even call serotonin “a gift from the Sun”. In England, it’s common to see people lying on the grass at parks and campuses whenever the sky clears up. 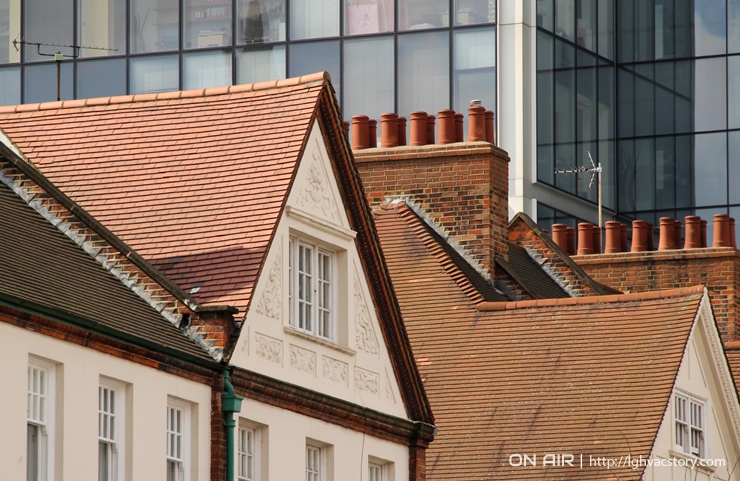 Roofs made of bricks

Now let’s have a look at their housing strategy. Buildings in England were designed based on their environmental factors, especially rain and sunshine. Houses are usually made of brick, since it doesn’t require painting and isn’t easily ruined by rain like wood. Roofs are sloped with tiles for better drainage, and drainpipes are connected from the roof to the ground. 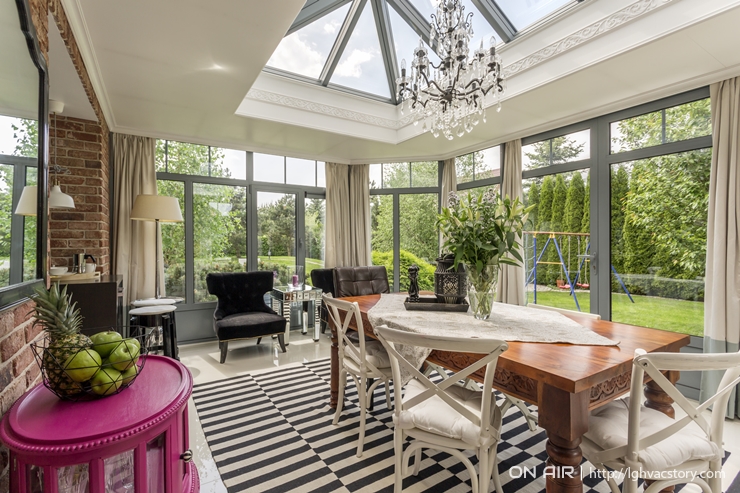 English houses also express their love for the Sun. Everything about these homes show how hard English people try to seize every moment of sunshine. Large windows, well-developed and designed additional “sun rooms”, and backyards set as the center of the house so residents can enjoy sunbathing are common examples of this. 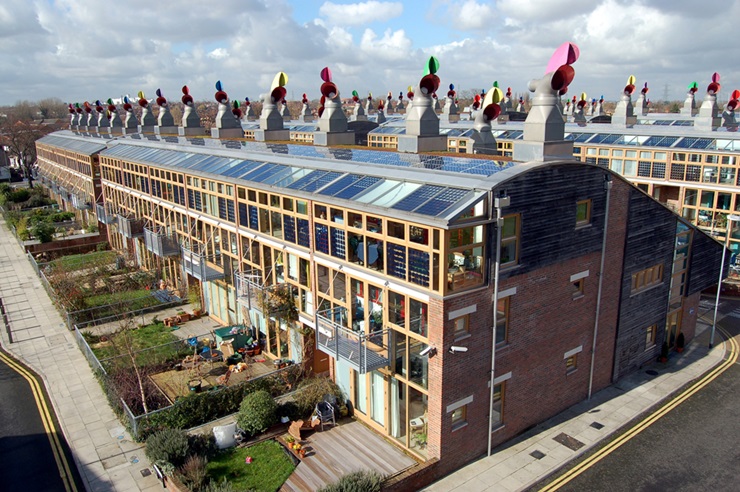 The city which best understands how to utilize sunshine is BedZED in the south of London. To use the natural light source as much as possible, buildings gather solar heat during the day to save energy. According to Bioregional, an environmental organization that participated in BedZED’s construction, the cost for heating these houses is as low as 10% compared to other houses.

Rain and waste water aren’t just thrown away either. These houses have roofs that are specifically designed to save rain and filter the accumulated water for use in bathrooms or rooftop gardens. Other than that, they have highly efficient electronics and an environment in which residents will naturally conserve water, such as by installing water-saving faucets and toilets. This is definitely a great example of high-efficiency, low energy, and eco-friendly construction.

Hope you found the article about April showers and housing strategies interesting. As mentioned above, we wouldn’t be able to see the flowers of May without the March winds and April showers. Hope all is well and happy in April. 🙂

Post Views: 2,807
*Products and solutions may vary according to country and operating conditions. Please click the 'INQUIRY TO BUY' banner below to contact your local LG office for further information on solutions and products.
Compressors, at the Core of Keeping Us Cool Previous
LG Electronics: Make Every Day Earth Day! Next