When developers are creating new inventions and finding ways to innovate products and systems, they often overlook the greatest wealth of innovative ideas that we have available. The Earth is billions of years old and the biological life on this planet inherently evolve to develop the most effective and efficient characteristics in order to succeed in its relative ecosystem. In recent years, scientists and developers have turned to nature for inspiration in developing new technologies and innovating existing products. The concept of emulating the time-tested patterns and strategies of nature is known as ‘biomimicry’. Let’s look into some of the fascinating ways biomimicry has innovated the world around us.

The engineers at LG Electronics have looked to nature and found innovations that are revolutionizing the air conditioning industry. But how could forces found in nature impact an industry like air conditioning? One of the most important components in an air conditioning system is the fan. The fan is one of the elements that propels air through the system and keeps users comfortable. This is where biomimicry comes into play. The LG engineers were looking for a way to improve the efficiency of their air conditioner fans to increase power, reduce energy consumption and also reduce sound emission. They found the solutions they needed in the humps of humpback whale flippers and clam shells.


From the Sea to the Air 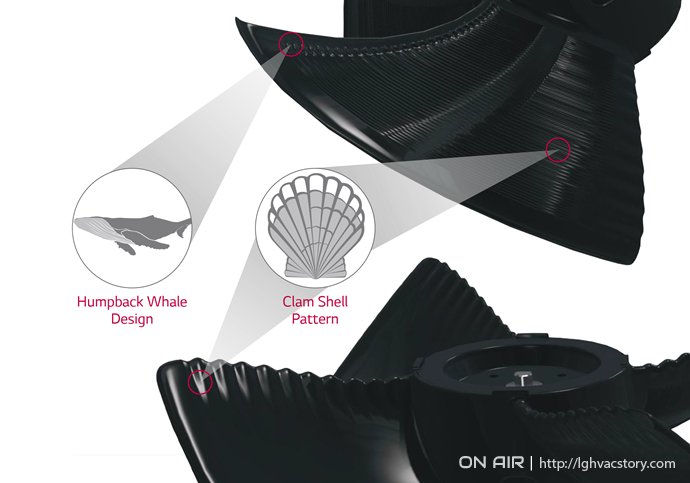 The humps on humpback whale flippers allow the flippers to glide smoothly and naturally through the water. This concept was applied to the suction side of air conditioner fans to reduce separation. The concept of the grooves in clam shells that keeps the clams from being swept up in waves and ocean currents was also applied to the fans. The grooves in the fans ultimately led to a reduction in air-flow loss and improved overall performance. With these biomimicry technologies, LG was able to increase the airflow rate by 10% and reduce energy consumption by 20% while reducing sound emission by 2dB. This is just one way in which biomimicry is innovating our world.

Related post
THE ‘LOW-NOISE, EFFICIENT FAN’ TECHNOLOGY SECRETS FOUND IN THE FINS OF A HUMPBACK WHALE

While the concept of biomimicry itself is a new idea, in actuality, humans have been using processes found in nature for a long time. One of the most illustrious and commercially successful examples of biomimicry is the invention of Velcro. Velcro was invented by an engineer named George de Mestral in the 1940s and 50s. Mestral was exploring in the Swiss Alps and noticed that burrs were constantly sticking to his pants, socks and the fur of his dog. When examining the burrs under a microscope, he noticed a unique type of hook system that the burrs used to attach themselves to passing animals. The burrs attach themselves to passing animals so that they can spread their seeds and ensure the success of the species. Mestral eventually found a way to emulate this functionality in a fastener system consisting of lineal fabric strip with tiny hooks and another fabric strip with even smaller hooks.

The Japanese Shinkansen bullet train is a high-speed train that travels at top speeds of 300km/h. Passengers were enjoying the high-speed transportation but the train was emitting a loud booming sound when exiting tunnels due to high air pressure. An engineer called Eiji Nakatsu was an avid bird watcher and observed the ability of kingfishers to enter the water at high speeds while barely making a splash. Nakatsu realized that the reason kingfishers barely made a splash when breaking the surface of the water was because the shape of their beaks has a slightly increasing diameter. He eventually went on to redesign the front of Shinkansen trains after the shape of kingfisher beaks and eliminated the booming sound the trains were emitting when exiting tunnels. The new Shinkansen trains are now also 10% faster and consume 15% less electricity.

From the Ground Up

The Eastgate Center shopping mall in Harare, Zimbabwe has no conventional air conditioning or heating installed but the temperature within the mall stays regulated year round. This is made possible through a combination of ingenious architecture and building techniques adopted from African termites. Termites in Zimbabwe feed primarily on a fungus that they culture within the gigantic mounds where they live. The fungus must be kept at precisely 87 degrees F even though the temperatures swing from 35 degrees at night to 104 degrees during the day in Zimbabwe. The termites are able to maintain a constant temperature in their mounds by opening and closing a series of air vents. Eastgate Center has implemented a similar network of air vents and shaft that keep the shopping mall at a comfortable temperature throughout the day while reducing energy consumption and costs.

Sharks can grow to be quite large and tend to move very slowly through the water at times. However, their skin stays exceptionally clear of algae and microorganisms. Shark skin is covered in microscopic V-shaped scales called denticles. A company based in Colorado, US, has developed a material based on shark skin denticles for use in clinical scenarios that prevents dangerous microorganisms such as E. coli from manifesting on surfaces and infecting humans. The film can also be used in restaurants and public restrooms to keep conditions hygienic. The denticles on shark skin also reduce drag while the sharks swim. This concept was copied in a joint development project between NAA and 3M to develop a drag resistant riblet surface material that can be applied to boat hulls and planes to increase speeds and reduce energy consumption.

There are many other applications where biomimicry is innovating technology and impacting our world. While the core idea of using elements found in nature to better our lives is not new, modern science is now embracing the concept in new ways that will change and improve the products we use and our lives. We can expect to see more biomimicry innovations in the future that will have profound effects on our lives.

Post Views: 3,422
*Products and solutions may vary according to country and operating conditions. Please click the 'INQUIRY TO BUY' banner below to contact your local LG office for further information on solutions and products.
Top 7 Digital Transformation Trends of 2018 Previous
Winter Tips for Staying Healthy Next